There are many treatments available for laminitis and these fall into two areas:

Finding and treating the trigger.

Over 90% of laminitis cases are caused by either Cushings in an older horse or Insulin resistance in an overweight horse. Nearly always, it is not a case of a horse getting too much lush grass, it is a horse with Cushing's or a horse with insulin resistance getting too much lush grass. The trigger must be addressed otherwise further bouts of laminitis are inevitable.

Treating the hoof pain that results.

Essentially, whatever the trigger, laminitis then becomes a biomechanical problem within the foot. In our opinion the best way to treat the foot pain is a combination of Imprint shoeing and anti-inflammatories

Nick is an approved fitter of Imprint® shoes. Although not a farrier he has undergone training by Imprint Farriery. Treating laminitis is a team effort and the farrier is an essential part of that team. However, not all farriers are trained in the use of Imprint shoes and Nick is able to assist in these cases by fitting the shoes. Speed is also essential when treating laminitis. It cannot be emphasized enough that laminitis is an emergency. A severe case needs immediate attention. If the farrier is unable to get to the horse quickly then Nick is able to get the first set of Imprint shoes on quickly, stabilizing the foot.

For more information on the Imprint Shoe system see: www.imprintshoes.co.uk 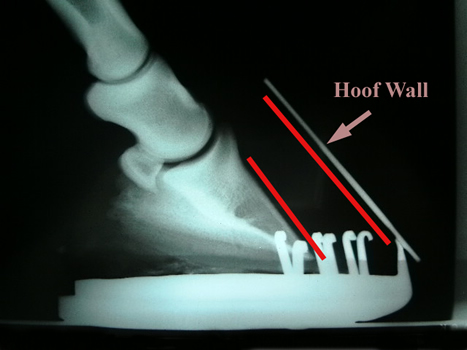 The hoof grows from two separate areas. The base of the foot generates the sole and the coronary band generates the hoof wall which grows continuously downwards. The ‘white line’ is the join between these two parts of the hoof. In normal circumstances most of the weight of the horse is supported by the part of the hoof wall contacting the ground. In effect, the horse ‘hangs’ off the inside of the hoof wall rather than standing on the sole. The structures attaching the hoof wall to the bone column of the horse are called the laminae. Laminitis is inflammation of these laminae. To give you some idea of the pain levels involved in laminitis; imagine your fingernail is a hoof (which in affect it is). Imagine your fingernail solidly whacked with a heavy hammer so that there is bleeding and pressure under the nail. That hurts. Now imagine having to do a handstand with a significant amount of your bodyweight resting on that fingernail. In severe laminitis, the horse is standing on 4 ‘whacked’ fingernails. Above is an an X-ray of a mild laminitis. Note the shoe has been left on for now. A metal strip has been fixed to the hoof wall to show its position. See how there is a slight divergence between the two red lines – some rotation of the bone has occurred.

What do farriers and vets mean by ‘rotation’? 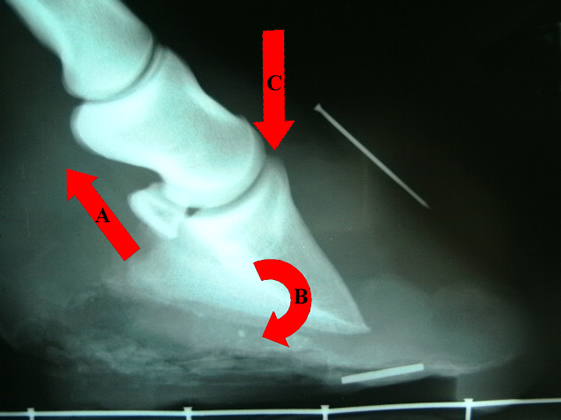 Most of the strength of the laminae attaching the hoof wall to the bone column is concentrated around the front of the hoof wall and this is the area that weakens most during laminitis. The tendons at the back of the foot tend to pull the bone within the foot downwards and towards the rear (ie: rotate it). In addition the rear of the foot bone is supported by the frog so the front end naturally ‘tips’ downwards. As the laminae weaken, the bone in the foot rotates and the tip of the bone then presses down on the sole, crushing the sensitive tissue there and causing more pain. Levels of rotation can vary from zero in mild attacks to 15-20% of rotation in the most severe cases. X-rays are critical for monitoring levels of rotation – there is no way of telling how much rotation has occurred without them. Above is an x-ray of a severe case of laminitis. The laminae have weakened and slipped and the pull of the tendons (A) has caused the bone to rotate (B). In addition some sinkage (C) has occurred. Note the wide divergence between the hoof wall (marked by the nail) and the bone.

What do farriers and vets mean by ‘founder’ and ‘sinkage’?

In more severe attacks of laminitis, the bone does not just rotate, it also sinks. The easiest way to imagine this is to think of the coronary band as a ‘cuff’ on a shirt. Imagine your clenched fist is the bone within the foot. The normal position for the cuff is at your wrist but if you push your arm further out of the sleeve (= the weight of the horse on the bone column), the cuff (coronary band) slips up your arm. Once it has slipped it does not tend to go back to a normal position. Remember, the coronary band grows the hoof wall. Once slipped, the hoof wall grows from a point further up the leg creating a longer, boxier foot. Generally founder gives a worse prognosis than rotation. Although you can detect founder by feeling for a dip at the coronary band, x-rays are still needed to determine the level of sinkage.

How do Imprint Shoes Help? 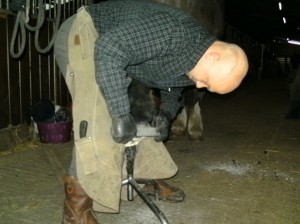 There are three major functions to the Imprint Shoe:

The shoe is attached to the hoof wall and when properly applied there is a gap between the whole of the sole and the shoe. Remember that a significant part of the pain in laminitis is caused by the shifting bone crushing the sole. Removing the sole from any contact with the ground alleviates this pain dramatically.

The frog plate of the shoe sits snugly under the frog, supporting the bone column and reducing the risk of further bone movement

The break-over point is brought back. During walking the horse effectively pivots the hoof over the front edge of the hoof. If the toe is over long, the leverage is increased and the tendons create more of a rotating pull on the bone within the foot. If the toe is shortened this leverage effect is decreased. Imprint shoes have rolled toes which bring the break-over point right back.

How are Imprint Shoes fitted? 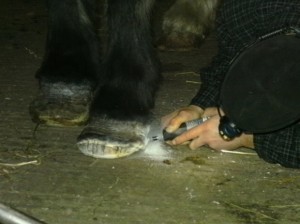 The ‘key-in’ points are Dremelled into the hoof wall.

The shoes are made of a thermoplastic that softens when heated and the physical characteristics of the plastic are similar to hoof itself. Firstly the foot is trimmed according to certain biomechanical principles. The heel is brought down as far as possible to counter the rotation in the foot bone caused by the laminitis. The toe is brought back as far as possible, removing any dead toe. The foot is tidied up and any crumbly horn is removed. The correct size Imprint shoe will then be selected. Once the biomechanical trim has been done, the foot is prepared for the shoe. Small key-in points are cut into the hoof wall with a Dremel. The shoe is then placed in boiling water for a few minutes which softens the wall of the shoe. A special glue is applied to the hoof wall and the softened shoe is moulded onto the hoof and the plastic pressed firmly into the key-in points. A freezer spray is then used to cool and reharden the shoe. There are no nails and no hammering so application is non-traumatic in a painful foot. One of the versatile points of the shoe is that there are granules available of the same plastic. This allows all sorts of modifications and alterations to be made after the shoe has been fitted. Heated granules can be melded onto a reheated part of the shoe to form a durable finish. 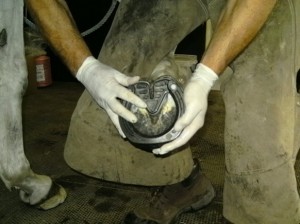 Left Nick fits an Imprint Sport Shoe. These are the same basic design as the Imprint First shoes but are made of a more durable plastic. They are designed for normal wear and tear and can be used instead of traditional metal shoes. When treating laminitis, they are useful at the second shoeing by which stage (hopefully) the horse is sound and exercise is possible. Using an Imprint Sport shoe at this stage gives you all the benefits of the Imprint system but in a grippy, hard-wearing format.

Below you can see the biomechanical effects of an Imprint trim. On the left you can see the excessive ‘dead’ toe left after the bone has rotated. The tip of the foot bone is pointing downwards at an alarming angle and you can almost imagine it crushing the sole. On the right, the heel has been brought down as far as possible, relieving some of the crushing effect. A lot of toe has been removed (although possibly a little more could come off) and you can see how much less leverage would be involved as the horse walks. This is a severe case of laminitis and demonstrates the effort that needs to be put in on such a case. This foot will need repeated trims and Imprint shoeings and you should not underestimate the commitment needed to fix one of these cases. 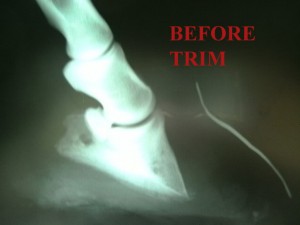 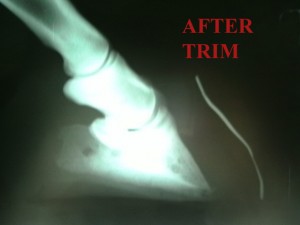